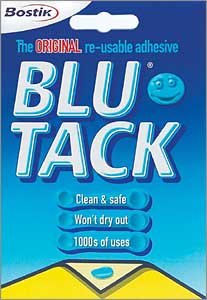 I discovered the unique properties of Blu-Tack many years ago. I had a batch of kneadable erasers that crumbled when formed into a point so, urgently needing an alternative, I turned my attention to the Blu-Tack that I used to hold my paper onto my drawing board. The results were amazing!

Since that day, I've used nothing else. And I've since tested similar products sent to me but none compare. Blu-Tack possesses just the right amount of stickiness; it doesn't mar the paper's surface; and graphite collected is never redeposited.

Blu-Tack can make subtle adjustments or it can virtually remove graphite completely. And, because it lifts graphite from the paper, it preserves the paper's tooth.

For extra subtlety, try drawing the detail and then adding tone layers that describe the three-dimensional shaping - Blu-Tack can gently and repeatedly adjust the tone layer, or it can incrementally remove both layers until the merest trace remains. It's almost impossible to draw with that degree of finesse — something that this system overcomes.

Blu-Tack is the original wall putty and a UK product that we now supply worldwide — our minimum order is just 3 packs.

Read a full description of its uses in my How to use Blu-Tack tutorial.


REST OF THE WORLD — Typical cost including shipping

Weekend Workshops
Now planning for next year.
Would you like me to visit your area? Let me know.