I've been asked on many occasions for help on drawing a variety of elements within a drawing and the Ellipse probably comes top of the list.  Ellipses can appear quite daunting at first but, like most problems you will encounter, they can be broken down into more manageable forms as I shall explain...
The Ellipse
How accurately must I draw an ellipse?
Very accurately! The eye of the viewer can detect any irregularity in a shape that it fully understands. A "square" that does not have sides of equal length, a "circle" that is not circular and an "ellipse" that deviates from perfection is immediately noted as being not what it claims to be - or, more precisely, it is not what the eye expects to see in that situation and is detected as being "foreign". In short, a "circular" circle is accepted in passing and the overall reality of the scene is maintained. The same is true of the ellipse.

What is an Ellipse? 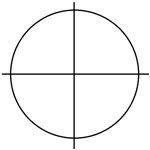 An ellipse is simply a circle seen in perspective. This is an important concept to keep in mind.

An ellipse, therefore, must conform to the same rules as a circle.

It consists of arcs, it contains no straight lines and, if divided into quarters, each segment is identical to the other three.

Breaking the problem down 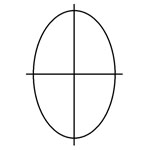 So, as with the circle, an ellipse contains four identical segments. To study this draw an ellipse using an ellipse template. Or use the circle/ellipse tool of a computer graphics programme to draw one (the basic MS Paint programme was used here) then print it out. Now draw a line vertically through the ellipse to divide it equally in half then draw another across it. It becomes immediately apparent that each quarter is identical to the others - just the orientation is different. The top left segment is a mirror image of the top right, which is a vertical mirror image of the bottom right segment below it... You've just reduced the problem by three-quarters - it's getting easier by the minute!

Now let's draw a box around our ellipse so we can properly study the geometry of one of those segments. If you're right-handed I suggest you concentrate on the top left - using the natural movement of your wrist, this is the first arc you will want to draw. Notice that both ends are "flat" to the sides of the box - an ellipse never comes to a point at the top or bottom. Notice also how the arc, as it travels from top to bottom, gently unwinds from a tight to a gentle curve. It does this smoothly with no hint of a straight section - this is, remember, a circle seen in perspective so only curves are involved.

First attempts
Keep your template or computer-drawn examples handy - they'll help you to draw the right curves in the following exercises. In time you'll be able to discard them and draw with understanding but, for now, I'll allow you to use a crib sheet! We'll start by repeating what you've leaned so far but in reverse.

(1) Draw a square in perspective on a vertical plane (you will probably find it slightly easier to draw vertical ellipses at first). A square about 8cm high by 4cm (3"×1½") will be about right. Keep it small so you don't need to move your arm during the exercise and you can see the result without moving your eyes.

(2) Divide it vertically in half (draw lines connecting opposite corners - where they cross is the true centre.). Then divide it in half horizontally.

(3) Now let's get started. We'll begin in the top left segment but, if you're left-handed, you might prefer to start top right. Study again the curve that your template produced then try to repeat the geometry in your top left segment. Starting almost flat to the top line of the square begin to curve down towards the side's halfway point, gently lessening the curve as you go. Aim to meet the side in the same "flat" manner that you started. Getting this first curve right is the main trick - everything that follows is just going to be a copy of it.
Hint: As you draw your curve, it often helps to look at the spot you are aiming for rather than the line you are drawing - look ahead of your pencil point to its destination. 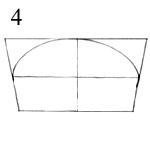 Now turn your paper clockwise through 90° and copy the curve you just drew but in reverse... 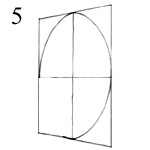 ...Turn your paper through 90° again and copy the curve you
just drew as a mirror image. 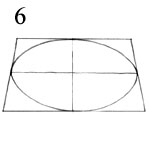 Finally turn your paper again and once more copy, as a mirror image, the curve you just drew.

Does it look right?  Well, no - in this case I need to do a little more work - but it's quite presentable for a first attempt.  Are there any flat sections? Do your lines meet smoothly as they pass from segment to segment? If you are having trouble working out why it looks wrong try viewing your ellipse in a mirror or turning it upside down to give your eye a fresh way of looking at it. If your paper is thin enough to see through when you shine a light through it - fold it in half along the horizontal dividing line - the two halves should match exactly so it will be easy to spot any errors. Having found the problem, erase the lines in that area leaving just a shadow to guide you. Now redraw to correct the flaw then ask again "Does it look right?"  Remember, the eye can always spot a fault with an ellipse so... If it looks right, it is right!

The more you practice, the easier ellipses become to draw. I doubt that's it's possible to really draw a perfect ellipse first time but your first attempts will get closer and closer to the finished shape.

The HORIZON factor
So far we've just drawn our ellipse as a circle distorted within a square conforming to vertical perspective. But for horizontal ellipses to work correctly you must also take their distance above or below the horizon into account. If you hold up a can of beans in front of you and lift it above your eye-level (the horizon) you will be looking under the can; below your eye-level and you will see it from above. Hold it straight in front of you and you will see the top half of the can from below and the bottom half from above. OK?

Note how the ellipse "flows" into the side. There is never a sharp join. Repeat the exercise but move the horizon down. 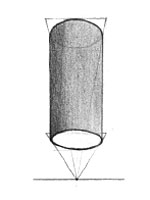 This time drop the horizon so both squares are above it. 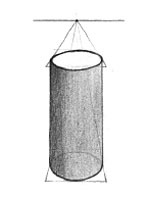 If you invert it, the ellipses are now below the horizon.

And correct too if turned left...

...or right of your viewing position.
And with practice... 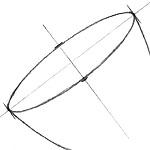 Once you understand the basic geometry of the curves involved you will probably find it sufficient to only lightly draw length and width dividers and add points marking the required dimensions.

If you need to draw really large ellipses it will often assist you to draw a smaller version first - small enough so you can see the whole ellipse without having to move your eyes. You can then enlarge this onto your final drawing surface (using any means you prefer from projection to mechanical resizing) or use it as a visual template to guide you when you draw it full size.

Finally there will be times when you need to draw one ellipse (or more) inside another. For example, when drawing a round, hollow object with walls having a substantial thickness, such as a terracotta flowerpot.  In this particular case you need to draw just the top half of the outer ellipse and to shift the inner ellipse slightly higher to account for perspective (the rear wall is further away than the front so a is narrower than b). The lower half of the outer ellipse needs to be "seen" only in your mind as it is solely defined by the lighting and shadow of the front face. If you attempt to draw this line first, however lightly, you stand a good chance of it remaining to haunt you - even after you've erased it, its slight indentation will probably attract extra graphite from your shading and be forever present! 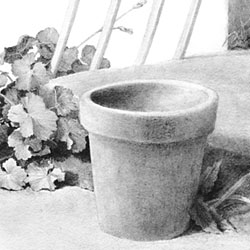 Is this ellipse perfect? No - but little in life is perfect and pots from kilns often show flaws. In this case I decided the slight skew added to, rather than detracted from, the reality... 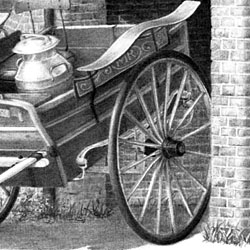 ...but here the churn and wheel had to be as perfect as I could draw them.
Ellipse examples... 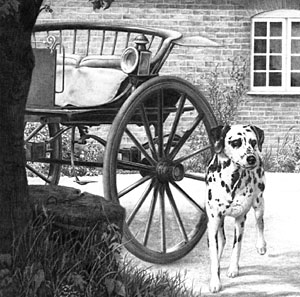 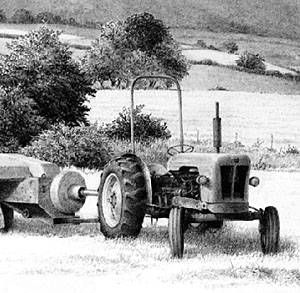 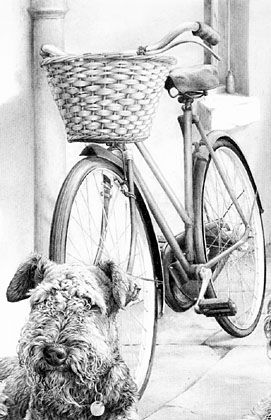 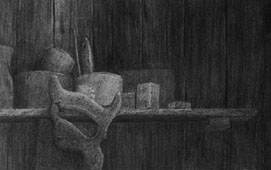 TOP TIP
Never undervalue your work - what you charge indicates to others its worth to you.
Consider these two statements: "I like it but it's so cheap it probably isn't as good as I think it is" and "I don't know why it's so expensive but it must be worth it!".  The price dictates the opinion.
Charge too little and you simply say "This is the value I put on my work and, personally, I don't think it's very good".