A timely tip from Brian McFann:
"I have benefited from your tip about Blu-Tack. You might warn people that if they let the Blu-Tack get too near the kneaded eraser (which I think you call a putty rubber), the two will join and it will be impossible to separate them". Thanks Brian!
Erasing with Blu-Tack - part 2

If you're new to this page I suggest you read Part 1 before you continue with this article about the use of Blu-Tack "wall putty" for erasing - when you've finished just click on "Continue to Part 2" at the bottom of the page to get back here.


Spot and Shape erasing
Remember that I said Blu-Tack "is not a kneadable eraser as you know it" and that, as a result of its sticky nature, it removes every grain of graphite?  Blu-Tack is indeed a graphite magnet!  All that is required during any of the following examples is a quick downward touch to embed the graphite grains for immediate and clean lifting.  You can also try rocking movements or even twisting but try to avoid any form of dragging.  Dragging (lightly!) is a technique worth exploring but for now accept that a smudge is the most likely result.

Spot Erasing: with Blu-Tack
Blu-Tack is extremely useful in this respect as it can get into places that other erasers find impossible. This is particularly true of the final cleaning of highlights and re-establishing the correct tone of small areas of importance that have become muddied during the drawing process. To spot erase

simply take a piece of Blu-Tack and pull a section out into a point then gently touch the point onto the spot that requires cleaning (or lightening or removing) and lift up. This will bring a certain amount of graphite with it. To continue cleaning, pull a new point and re-apply until the desired cleanliness is achieved. If you are lightening an area, try using the same partially graphite-loaded point, which will now pick up a lesser amount each time you apply it.

The example below (fig.1) shows the results of spot cleaning by Blu-Tack - the eye has had the all-important highlight returned to the necessary white. This is important as that single highlight often dictates the total range of tonal contrast throughout the drawing. In fig.2 and fig.3 the water at the base of the eye has also been brightened - areas so narrow (the images are 30% larger than life-size) that no conventional eraser could have succeeded - not even a kneaded eraser, which does not possess the inherent non-staining tackiness of Blu-Tack.

Blu-Tack was also used in all three cases to continually adjust the form and tone of each iris until the desired effect was obtained. The eraser is so gentle in its removal of graphite that incredibly subtle changes can be made again and again without damage to the surface.

Spot erasing was used here to improve the nostril highlight and the highlight on top of the nose, where the detail has been subtly lightened to blend into the highlight - using a very light touch, Blu-Tack is able to remove and fade just a proportion of the graphite, leaving the detail intact in a way that no other eraser can imitate.


Spot Erasing: using conventional erasers
I have found only one tool that will do this successfully — apart from the point of a scalpel, which can be used as a last resort! The requirement is for a soft eraser that can be reduced to as near a sharp point as possible and here the Staedtler fits the description. Of the two versions shown I use the top one — although this is now unavailable the 528-55 refills for the 528-50 below will fit the old (and more comfortable and precise) holder.

The eraser core is capable of being formed to a very fine point using a conventional pencil sharpener and, with care, can be used to erase very small areas — but this does need a mechanical rubbing motion which requires space so, unlike Blu-Tack, this eraser cannot be used in very restricted places.


Shape Erasing:
This is part of the much wider subject of "negative" drawing, which I intend to cover at a later date. The basics, of course, simply involve removing already applied graphite to "draw" light or white shapes within it. Blu-Tack shines at this - the merest touch leaving a clear sharp-edged impression of a shape easily pre-formed in the putty. It is exceptional at suggesting background foliage, hairs in areas of deep shadow, anywhere that a suggestion is to be preferred over sharp focus. And for making additions at a late stage - having, for example, completed a section of foliage against a dark background you may decide that the section possesses some imbalance — a touch or two of pre-formed Blu-Tack will quickly add mid-ground foliage to redress the balance. A more determined touch or series of touches can even take 6B almost back to white if further foreground foliage is desired.

The intention here was to hide the rabbit in the undergrowth to the point where it was not immediately noticeable.  Changes will have to be made for the intention to succeed.

A little more highlighted interest is required around the rabbit to distract the viewer's eye.  Here I have cut shapes into the 2B-drawn depths with Blu-Tack - the eraser point having been roughly formed into leaf shapes between my finger-tips.

The leaves have been defined and drawn but still more distraction is required.  The rabbit is still too conveniently framed.  A new bramble is cut in with Blu-Tack - pinched into a short knife edge then repeatedly applied along the required length.

The narrow, erased line has been defined, shaped into a twig and textured.  I'm happy with this — I don't want the rabbit so well hidden that it's never found!

Below is the final result in situ.  The sample was taken from my Border Terrier study "Overlooked!". 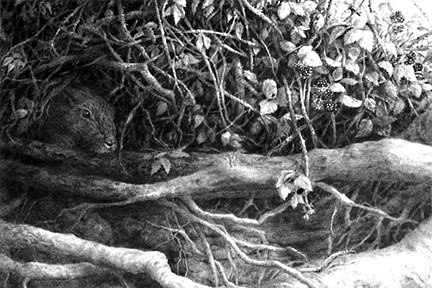 Paper and Pencil cleaning — three other uses for Blu-Tack.
Cleaning the paper around your image on completion is a chore lightened by Blu-Tack. As I explained in complete erasure, form your putty into a fat sausage and roll it around on the area to be cleaned. This will efficiently remove all loose graphite and most of that embedded. Then clean away the last remnants with a clean soft art eraser for whiter-than-white results.

Whether you use drafting or conventional wood-cased pencils, it is always a good idea to clean graphite dust and grains from the business end whenever you sharpen it. I keep an old lump of Blu-Tack stuck to my drawing-board and just push the fresh pencil point into it for immediate cleaning.

There was a third use...? Something obscure yet unique... Oh, yes - you can use it fix your finished work to the wall!

Click below for prices, shipping details and order form.

Accept no alternatives. Blu-Tack is not widely available outside the UK and I have received many reports on similar products, such as Hold-Tu and Tack'N'Stick. I invariably find Blu-Tack to be superior because it possesses a tackiness not inherent in other products, which tend to be only as useful as a normal kneadable eraser.

Order Blu-Tack
"I just received the Blu-tack... and it really is fantastic!  I am working on a drawing, and as soon as I tried using the Blu-Tack, what a difference!  I have about 5 other brands of tacky stuff and nothing works like this!  And you are right that it gently lifts the graphite without ruining the original pencil marks. I love it!"
Sherry Szmigiel, USA
TOP TIP
Keep a soft paintbrush handy at all times - I keep a #8 behind my ear! Make a habit of always using the brush to clear away debris when erasing with your soft art eraser. This will prevent damage to your drawing, caused by natural oil from your skin, if you brush it off with your hand or spots of moisture (or coffee!) if you blow it off.